With so many subscription boxes on the market, those who have a keen interest in trying new products but are short on time to go and browse the beauty counters are spoilt for choice. That’s not to mention the fact that trying a new product is often expensive and if you have a reaction to it or simply don’t like it, it’s money down the drain. That’s why I love subscription boxes. I’ve discovered new products that I would never have otherwise found. It’s good for brands and good for consumers. I was lucky enough to be given a sample of Secret Scent Box, a perfume subscription service that sends you three sample sized bottles of a new designer fragrance each month. As always, all opinions are my own because nobody tells me what to write. 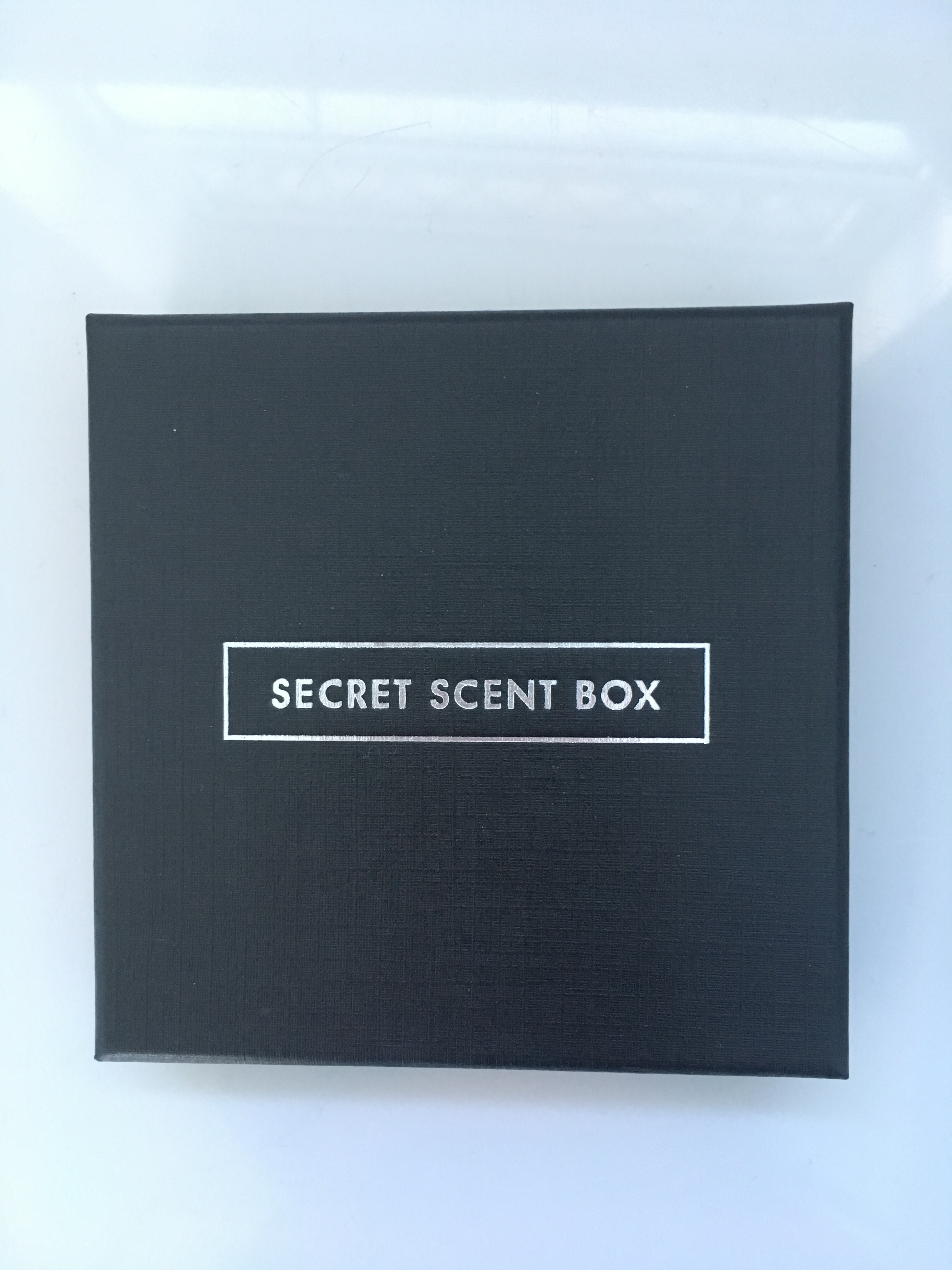 Secret Scent Box are based in the UK, so they are best for British and European consumers are if you live in the UK or Europe, you get free postage. Since it’s perfume, sending it internationally can be problematic and they don’t currently ship worldwide, so it’s best to find a subscription service in your own country and international readers might not find this review useful right now, but if you’re in the UK or Europe, read on!

Then first great thing about this is that there are three scents to sample every month. They are designer branded fragrances, so it’s not going to be obscure perfumes you’ve never heard of before. The idea is that each small 3 ml bottle will last you ten days so you have a thirty-day supply in the box. It obviously depends on how much you put on, but this is estimated using averages of four sprays per day – one for each wrist and each side of the neck perhaps? 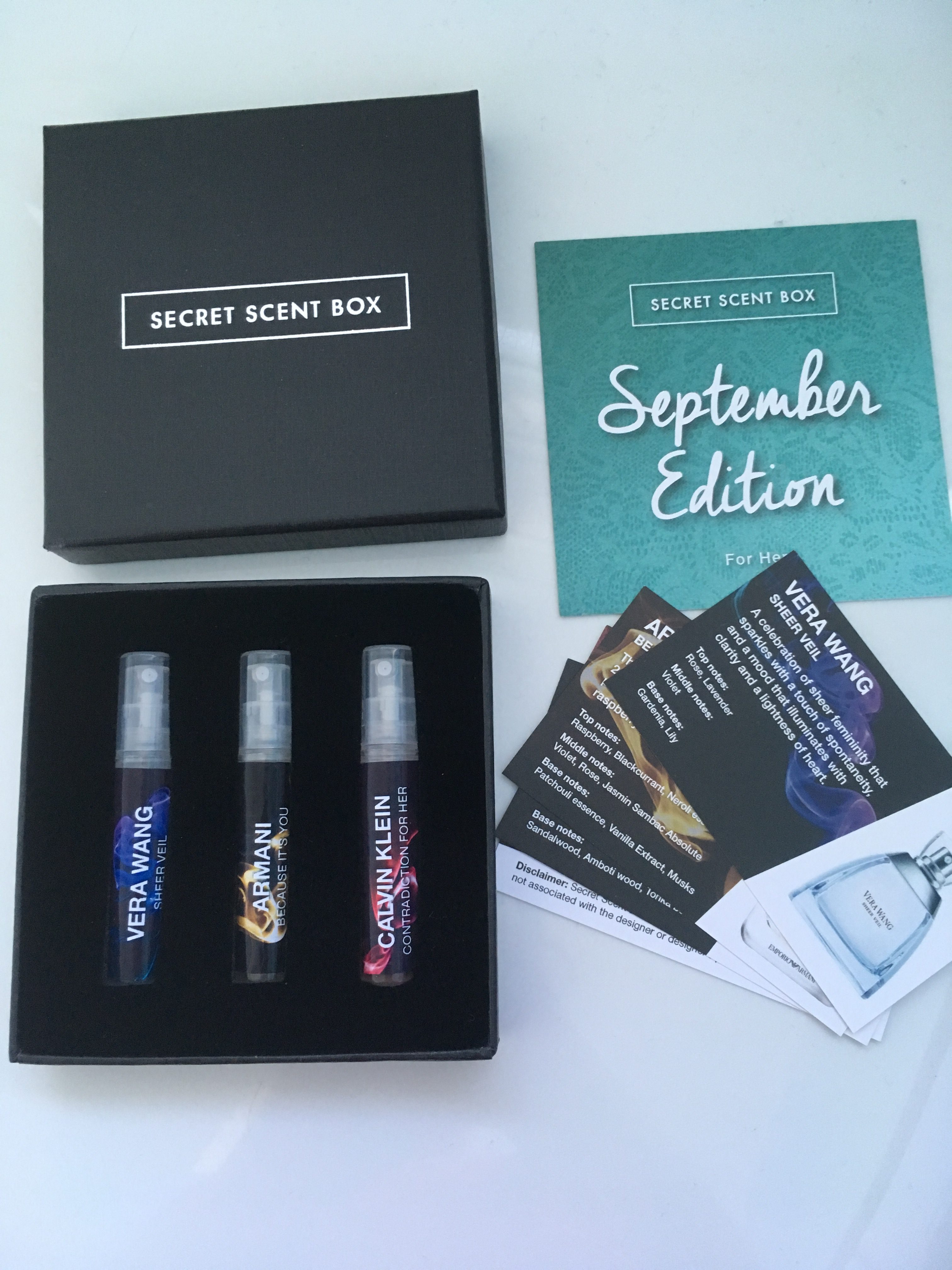 The box it comes in is compact and classy. It fits easily through the letterbox and isn’t going to end up sitting in the post office waiting for you to collect it, so right away that’s a thumbs up for this service. Inside the box you’ll find three small bottles with the scents included clearly labelled. Unlike the samples you can receive at department store beauty counters, they are not official branded labels and the bottles have been put together by Secret Scent Box staff. However, they are neat and don’t leak and are small enough to fit in your handbag or make-up bag. 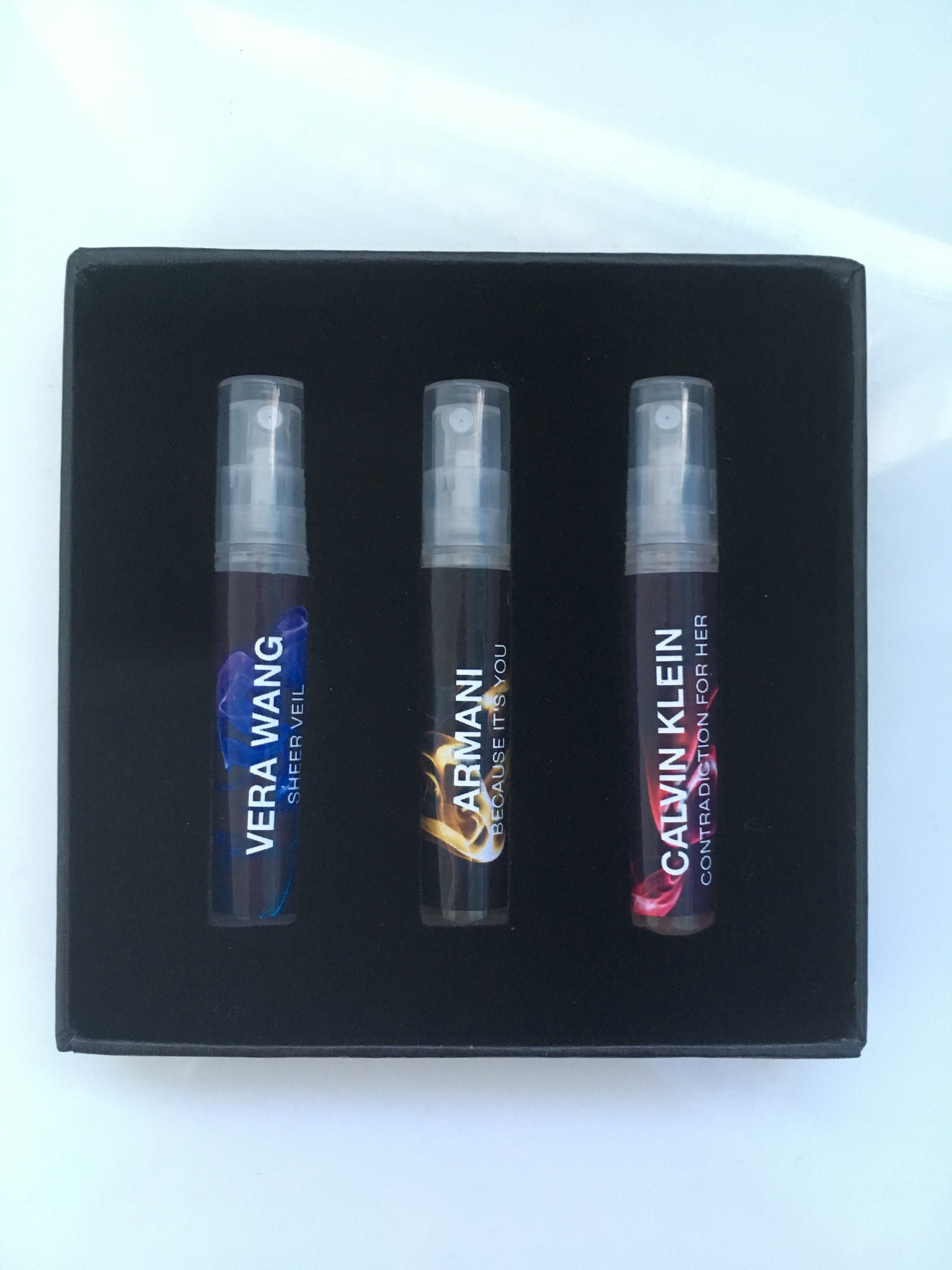 You’ll also get a little card for each fragrance which lists the fragrance name and designer, although not the nose behind it, which is something I would have loved to know. The card then lists some of the major notes involved in the fragrance, but obviously not all of them because designer fragrances are so complex and can contain literally hundreds of ingredients in small concentrations. If this could be improved at all, I’d add the nose of the fragrance and the release date. Maybe some information about silage and strength would be helpful. Fragrance enthusiasts would love this kind of information and it’s a shame it isn’t provided. 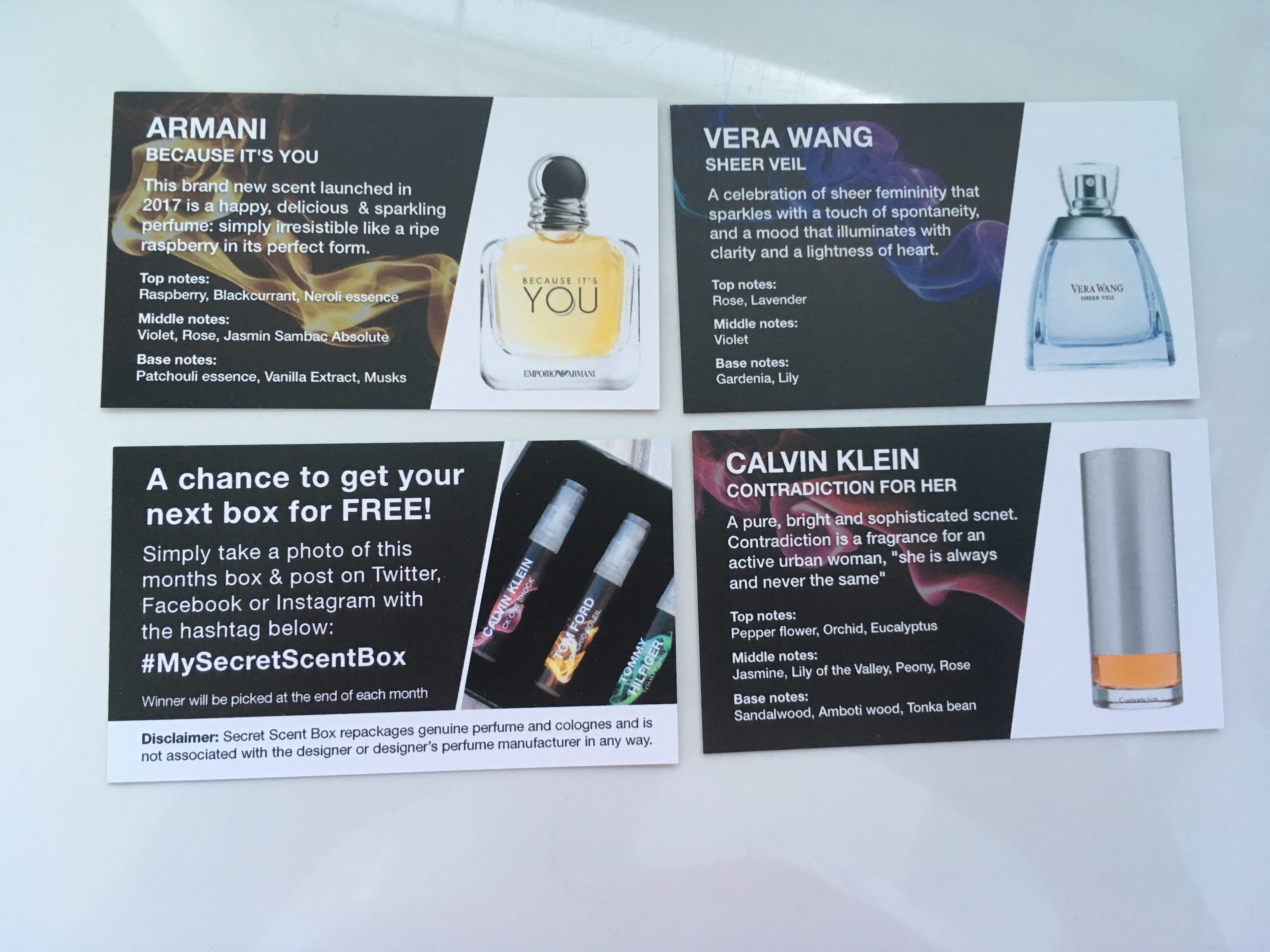 Some of the brands you could receive are Chanel, Jimmy Choo, Gucci, Prada and Givenchy and that’s just a small selection of the designers. If you can find it at a department store fragrance counter, there’s a good chance it could end up being one of the perfumes you receive here. That’s great news for those of us who like designer scents and want to easily find the perfumes again afterwards. The drawback is that it’s not packaged in official bottles. That could put off some potential subscribers but the scents are authentic. They are the real deal. The small print on their website declares this so they are being totally transparent about it.

“All fragrances are 100% authentic which are sourced from authorised vendors and then repackaged into smaller spray bottles by Secret Scent Box, London, UK. Secret Scent Box is totally independent from any designers, brands or manufacturers.”

Another great thing about this is that you don’t get any hints beforehand about which scents you’re receiving that month so it’s like getting a little present from yourself! It’s a minor thing which some people would probably find silly but if you’re like me and you like surprises, the secrecy of it could give you a little thrill! Each month will feature three new scents but if one has been particularly popular, they might include it again. There would be at least six months between appearances though, to give other fragrances a chance to be featured. 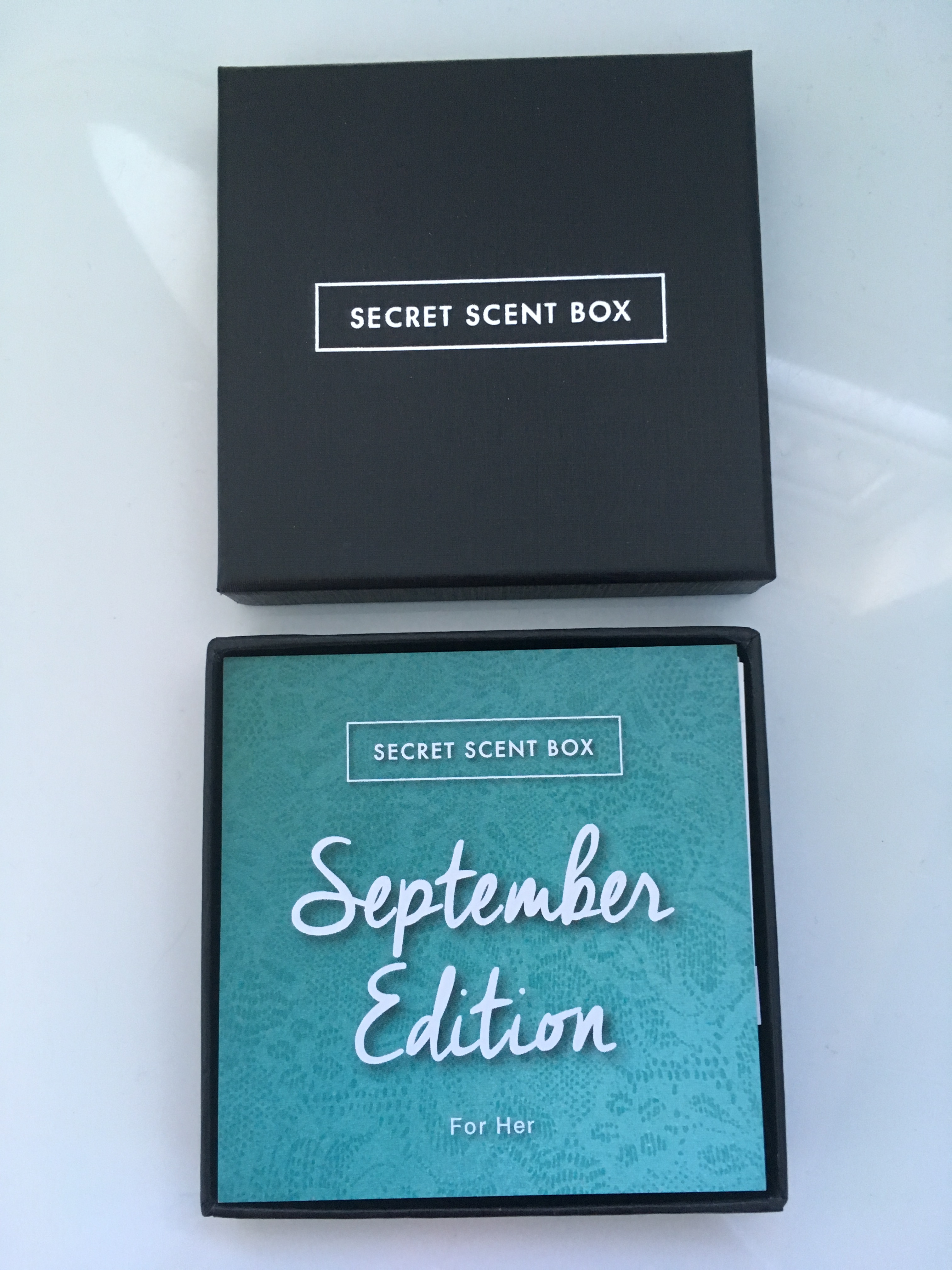 It’s available for both males and females and costs £15 a month. You can get 10% off the first box if you sign up for their mailing list. You can send it as a gift to someone if you like. A subscription to this would make an excellent Christmas present for the perfume lover in your life. You can find out more and sign up on their website. 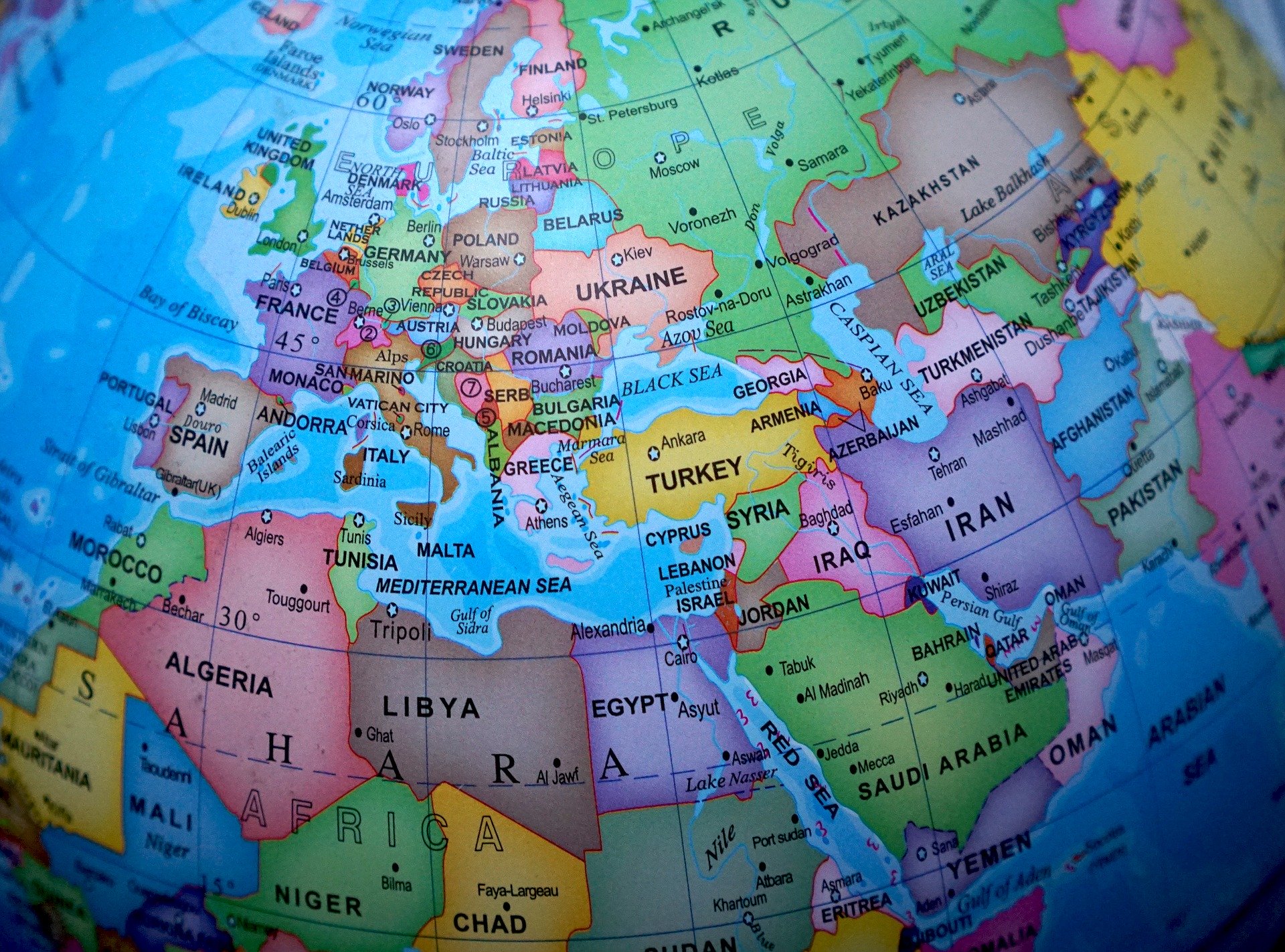